Serving in Afghanistan was unique, but bond with veterans is universal

The Following article was written by Burt Constable for the Daily Herald on November 11, 2021.

We know about D-Day, have read “Band of Brothers,” watched “The Great Escape” and heard stories from our “Greatest Generation” relatives who served during World War II. But most Americans still can’t find the location of our nation’s longest war on a map.

Everyone knows the Nazis wore swastikas, but how did we identify the Taliban, and where was the front in Afghanistan?

“It was everywhere,” says Ashton Kroner, a 32-year-old mother of two in Crystal Lake who served eight years in the U.S. Marines, including tours in Iraq and Afghanistan. Now, as outreach manager for the Road Home Program at Chicago’s Rush University Medical Center, Kroner helps veterans get free services for the issues they brought home with them.

“Since the Road Home Program began caring for veterans and their families in March of 2014, more than 3,000 veterans and nearly 1,000 family members have received help they’ve needed, and deserve, to make a healthy transition to civilian life,” says Will Beiersdorf, an Arlington Heights resident and director of the effort at roadhomeprogram.org. “More than 800 veterans have participated in an intensive outpatient program that delivers innovative post-traumatic stress disorder therapy in two weeks that would typically take months.”

Those programs help veterans such as Kroner and Andy Shaughnessy of Woodstock.

Shaughnessy, who grew up in Boston, was set to go to West Point until his high school counselor missed a deadline. So he enlisted in the Army. “I still wanted to serve my country,” says the 29-year-old, who is married to Alyson Shaughnessy and works in finance and the Veteran Community Action Team at Veterans Path to Hope in Crystal Lake.

Kroner was 7 years old and living in Abilene, Texas, when she saw back-to-back TV commercials for the Marines and the Army, marched up to her parents, Melodi Kammann and Thomas Childress, and announced her plans to enlist in the military when she got old enough.

At 19, Kroner spent 10 months in Iraq in 2009 while many of her peers were experiencing the stress of college. “They were worried about going out, and grades, and I was getting shot at,” says Kroner, who also saw a lot of improvised explosive devices all over Iraq.

Official policy at that time barred women from being assigned direct ground combat duty. So Kroner, who says she realized the battle “was all about winning hearts and minds,” volunteered to become part of Team Lioness. She and fellow Lioness Andrea Molinar “were attached to a male infantry unit and would go through a town on foot,” Kroner says, noting they could approach women who weren’t allowed to be in the company of men. “We would give them fresh water. I’d have my cargo pockets filled with candy and toys that I’d give to kids with their parents’ permission, They gave us information about al-Qaida and what was happening in town.”

Wearing the same heavy and bulky flak jacket as the men, Kroner also wore a helmet and eye protection. “I had some wicked awful suntan lines,” she says with a laugh. She carried a 25-pound radio, her M4 service rifle, her M9 pistol and 180 rounds of ammo, which she used at times to return enemy fire. At times, it was difficult to determine who was the enemy.

“It’s really easy to put a pregnant belly on and not be pregnant,” Kroner says, recalling one suicide bomber whose belly was a bomb that killed four people.

Marine Sgt. Casey Kroner was stationed on the same base, but the pair didn’t start dating until the returned stateside.

They married in August 2010. She adopted his daughter, Kaydence, 17, and they have a 7-year-old son, C.J., named after his dad. In July 2011, she went to Afghanistan and lived at Camp Leatherneck in Helmand Province, where Shaughnessy was stationed with his Army platoon.

“Iraq was hot, but this was brutal heat,” Kroner says, noting temperatures as high as 120 degrees. 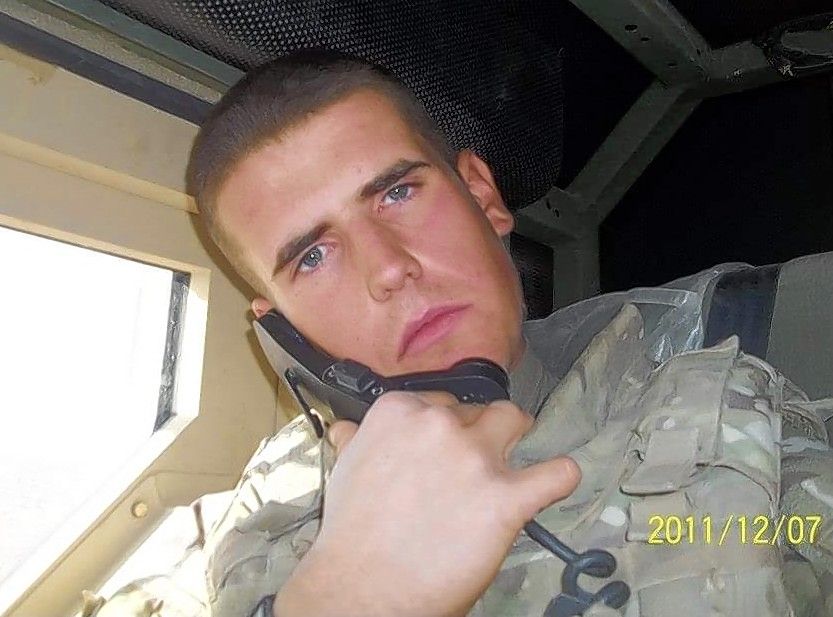 Rumbling across Afghanistan in this wrecker, Andy Shaughnessy and his Army peers looked for roadside bombs. About four days after this photo he was injured in a blast.
Courtesy of Andy Shaughnessy

“It smelt like wet sand,” Shaughnessy remembers. “When the wind blew, it blew the sand in your eyes.”

As a heavy equipment mechanic, he slept in a constructed building with 24 men in a single room. “We were the ones who went out and found all those IEDs,” Shaughnessy says. “I was petrified.”

One explosion gave him a concussion and injured his back and right knee, but Shaughnessy says he didn’t want to apply for a Purple Heart. “That’s for the guys who can’t walk on their own legs and can’t eat with their own arms,” he says, noting that he did receive a Combat Action Badge among his honors.

Kroner, who dislocated her left shoulder during hand-to-hand combat training with a male Marine, ran a marathon and staged a series of athletic events for Marines in Afghanistan. She spent much of her time in the Combat Operation Center, listening to radio chatter to see if anyone needed medics, reinforcement or other help. She still carried an M16 slung over her shoulder, “kind of like a purse,” and 30 rounds of ammunition. She traveled to different bases to check on Marines, sleeping in “cans,” or small metal trailers with four bunk beds.

Part of the Marines’ duty was training Afghanistan police officers, one of whom went on a shooting spree on May 12, 2011. “We lost one Marine in chow hall,” she says, rattling off the name of Sgt. Kevin B. Balduf, 27, of Tennessee, without looking at the bracelet she wears in his memory.

Shaughnessy says he lost about a dozen friends in Afghanistan.

Kroner will never forget the “dignified transfers,” where she watched cedar boxes draped with flags and carrying the remains of fallen military members be unloaded off the back of a C-130 plane. “I don’t know how many. A lot,” she says. “They died fighting for their country.”

Kroner, who also volunteers with Lake County Veterans and Family Services Foundation, and her husband both have service dogs provided by K9s For Veterans, and that helps with their PTSD. Shaughnessy has one, too. “My wife noticed the change in me the minute I got him,” Shaughnessy says.

With Osama bin Laden being killed on the night of Shaughnessy’s 19th birthday, many Americans wonder why the war in Afghanistan went on for another decade and lament the way it ended.

“We went over there with the intention to help them make their lives better,” Shaughnessy says. “You won’t hear the stories of the villagers who came out to greet us.” 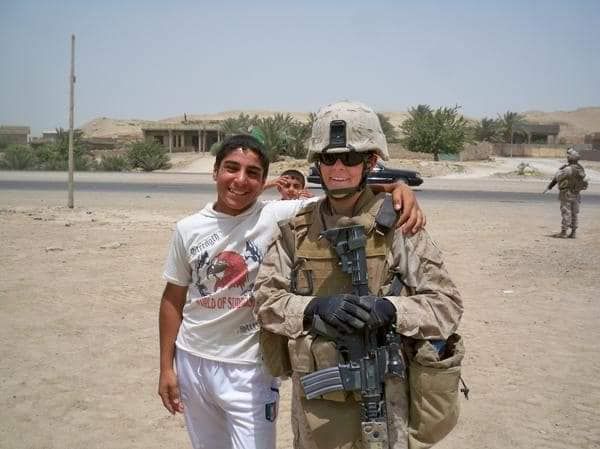 “I realize people don’t know who we are and what we do. We were forgotten,” Kroner says. “It was such a long war. Twenty years of family not being together, lives and limbs lost.”